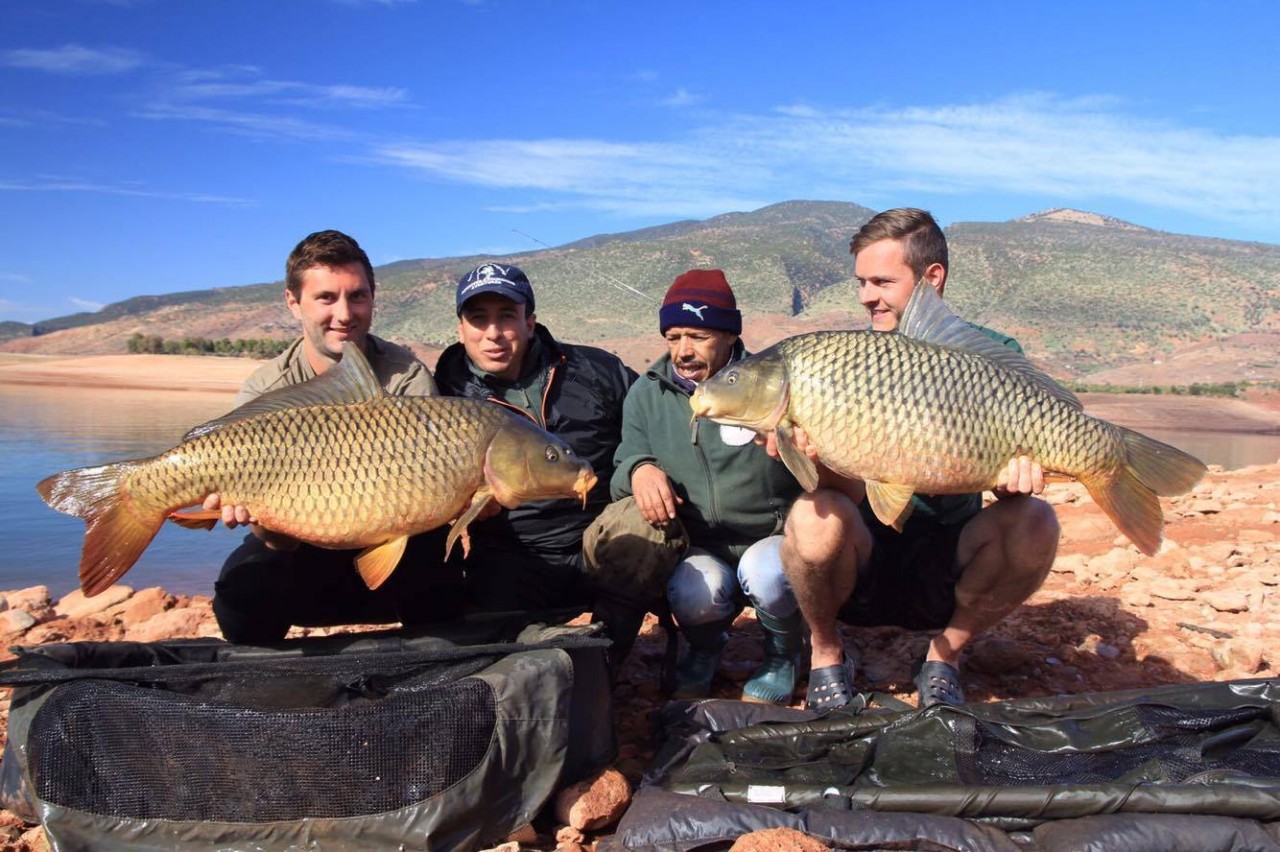 Wow what a month!
We got off to a flying start in October with over 400 fish caught and with a number of very big fish over 26k!

Our new fishmeal atlas 2.0 boillies were doing fantastically, the new vortex 2.85 boats and vortex 55lb thrust motors / lowrance fishfinders were performing great along with all our new equipment, and all clients were going home happy having had sessions they could have only dreamed off! It was a wonderful start, we couldn't have wished for any more. 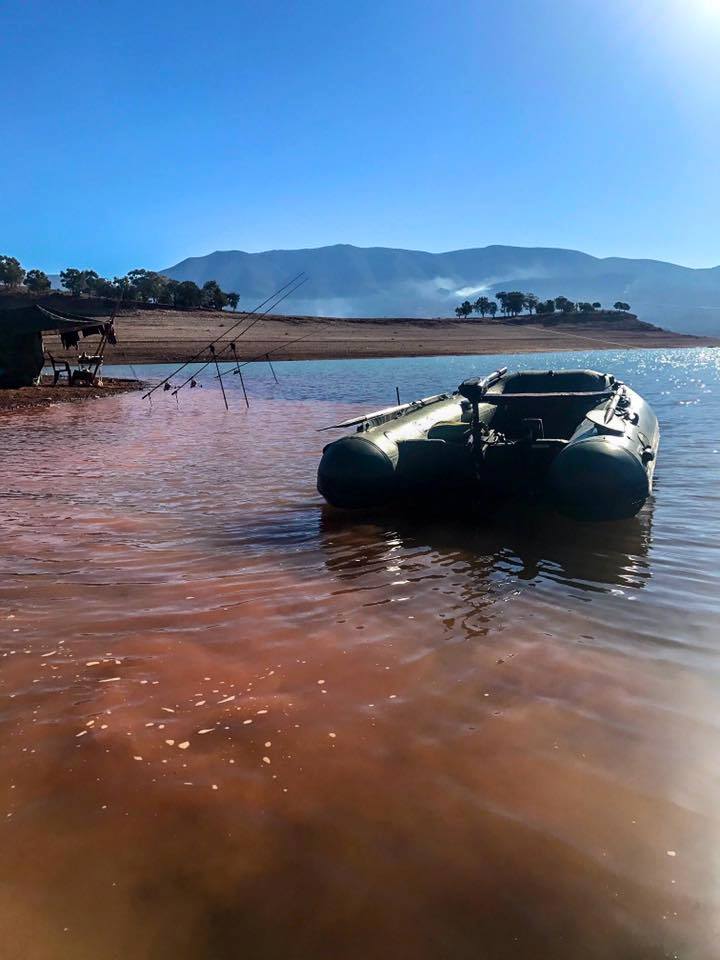 We were concerned that as the temperatures started to drop the great fishing we'd experienced in October and November would slow, but alas the fishing has continued to get better and December has seen some excellent results to those who have been on the lake. 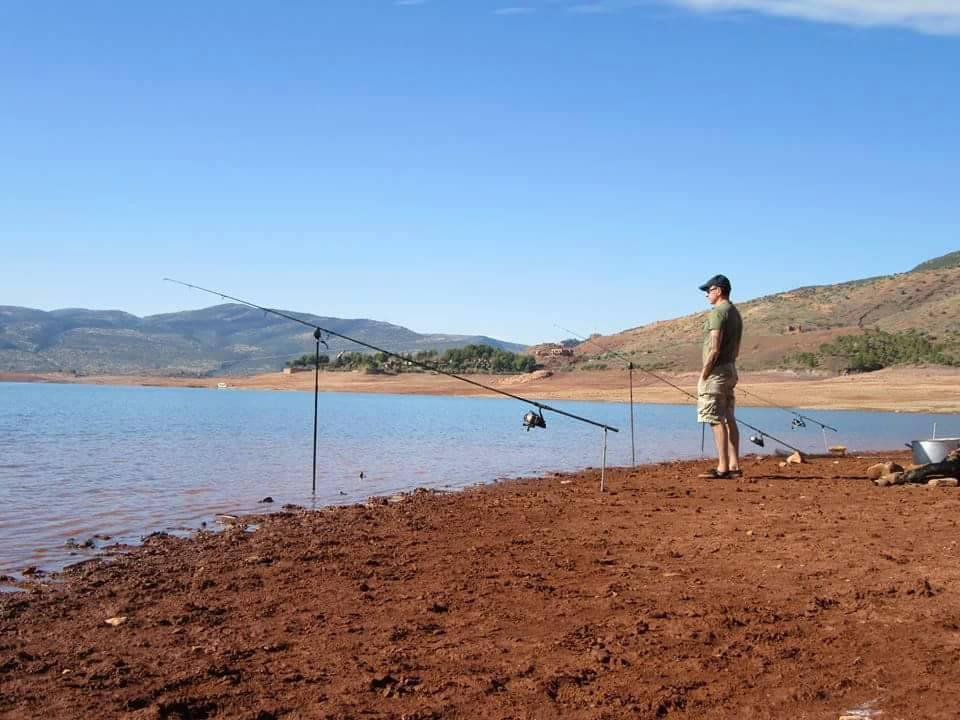 Due to a major lack of rain that has effected most of Africa these past two years with drought, the water levels of Bin EL Ouidane had reached record lows this year! We've been sat fishing on Islands that anglers would usually be dropping baits on, it's been remarkable to view and physically stand on the many underwater features we'd only pictured before with the use of fishfinders. 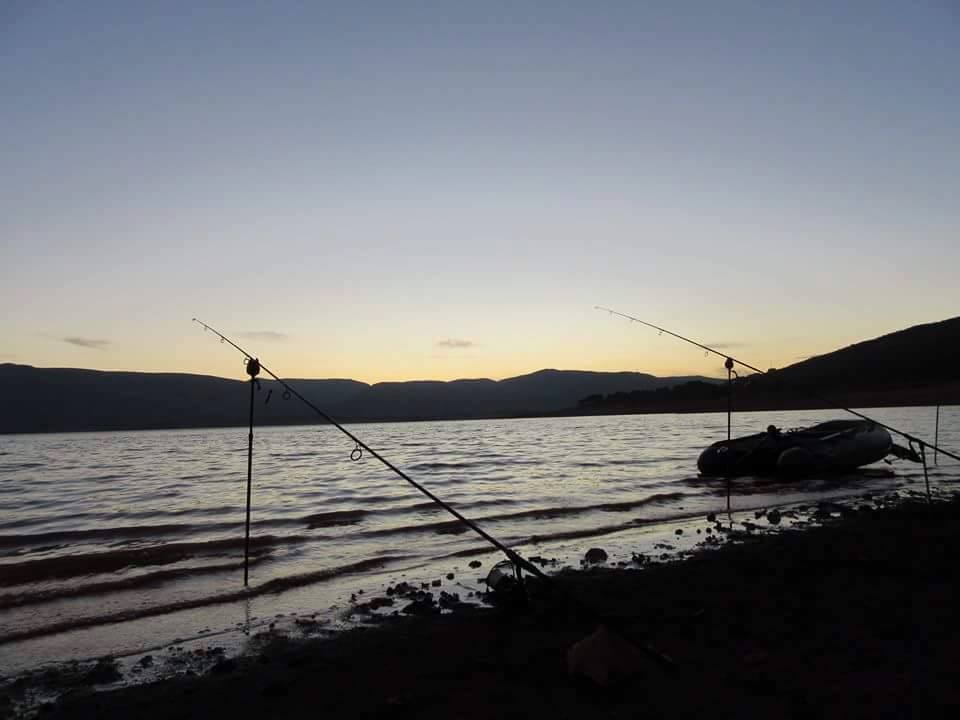 The unique topography of the lake is fascinating, there are just hundreds of Islands and plateaus, old river beds and drastic drop offs some of which we've been able to pin point now which will help the fishing once the water levels have finished rising.

The good news is, despite the low water levels for much of 2016 the fishing has actually been better than ever before! The stock has remained the same but you are actually fishing a smaller lake, so location is in fact easier. 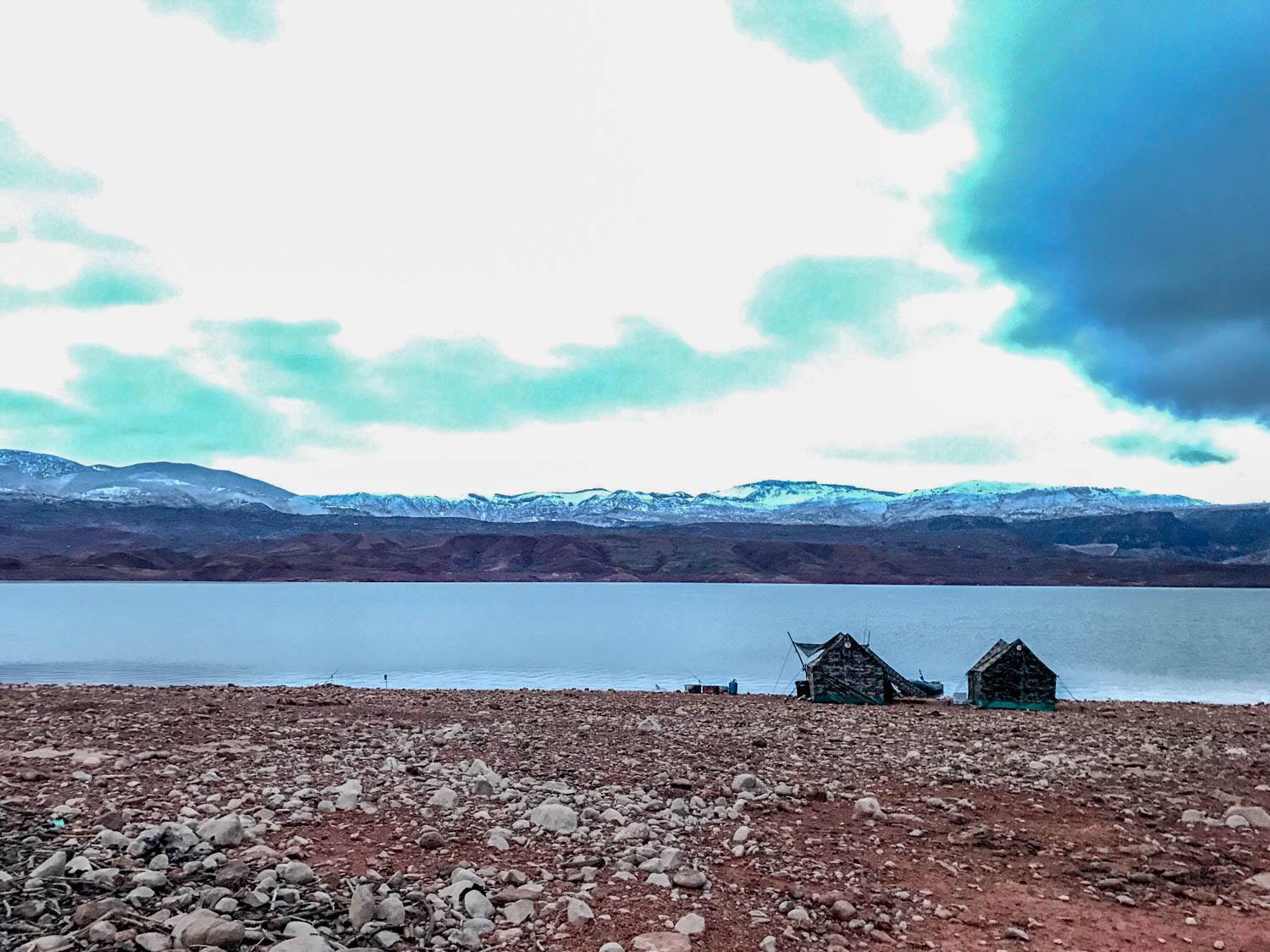 At the start of December the rains finally came, and for the last 5 weeks now the lake has been rising by a half a meter each day! By March/April we predict the water level to be near to its highest point, but for now we've all enjoyed the incredible fishing from the many new islands that have mostly all now disappeared back into the clear blue waters of the Great Lake .. ,maybe they will return in a few years. 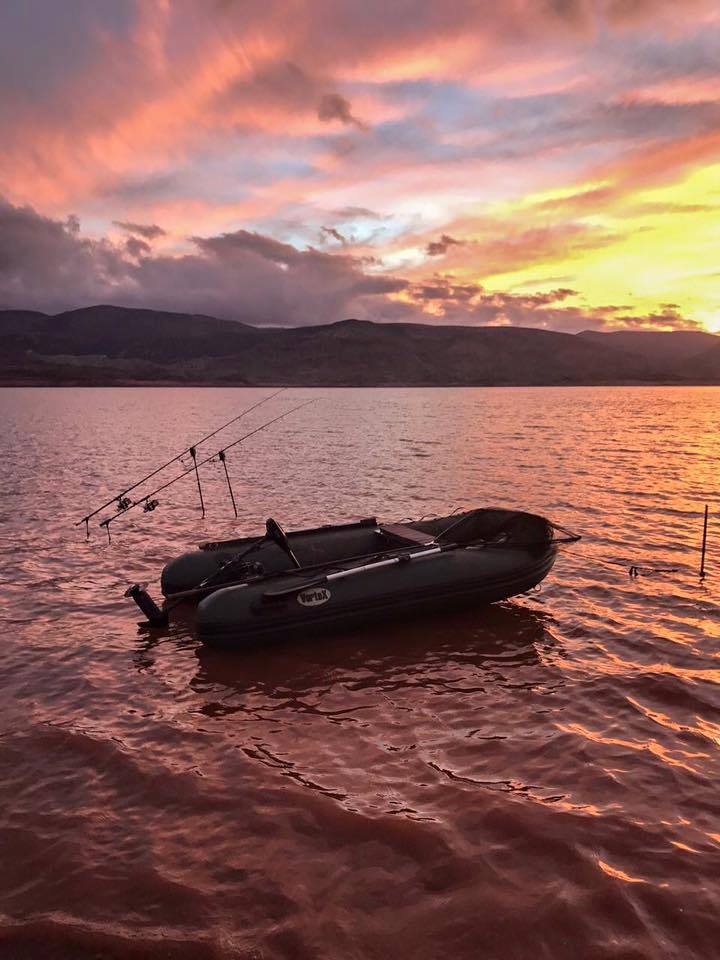 For those lucky enough to fish these spots this month, the results have been pretty hectic..........with some fish of a lifetime to those fortunate few.

Here are just a few results from clients this month.. 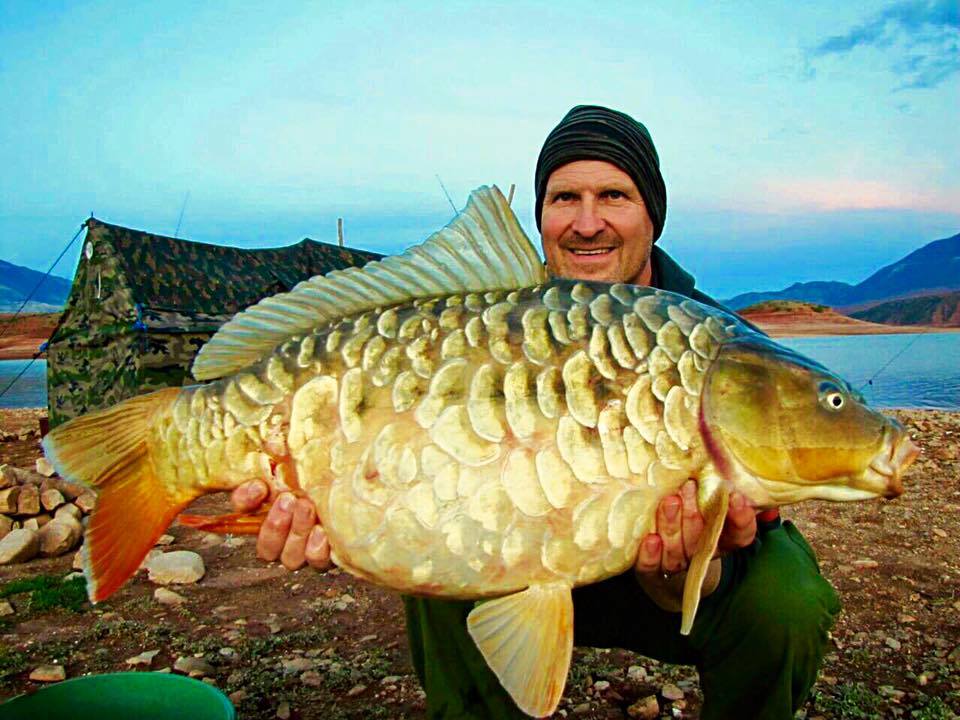 Uwe Bloch from Germany started the month off fishing from paradise island. After spotting fish in crazy shallow water 1.5m, very close in, he went on to catch 90 fish in a week!

With a good number over 20k and upto 25k. Our Atlas boillies and maize..
We believe the fish are moving in shallower water at present due to the rising water levels, so to all those coming out in January it maybe advisable to try rods shallow, below 10meters... 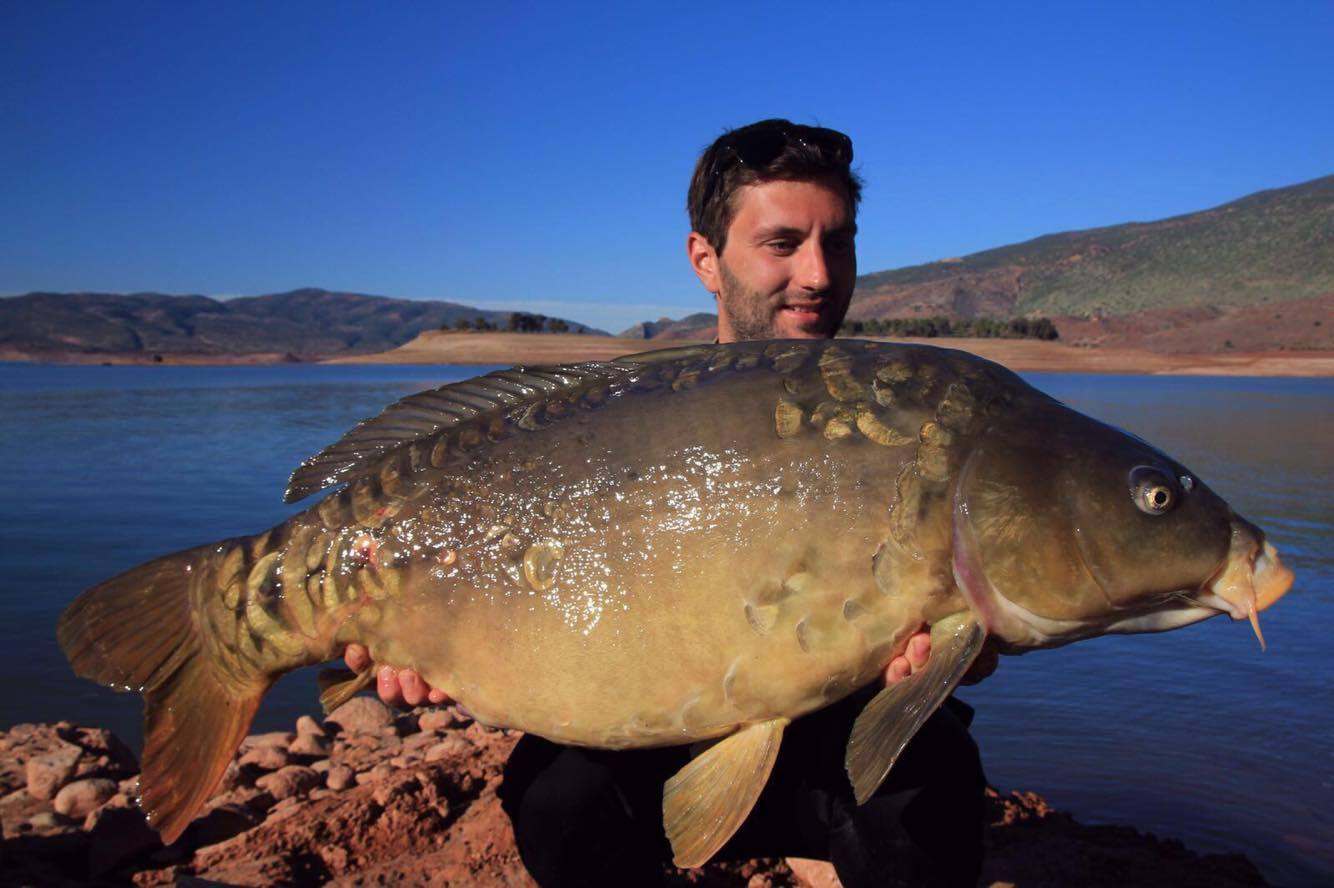 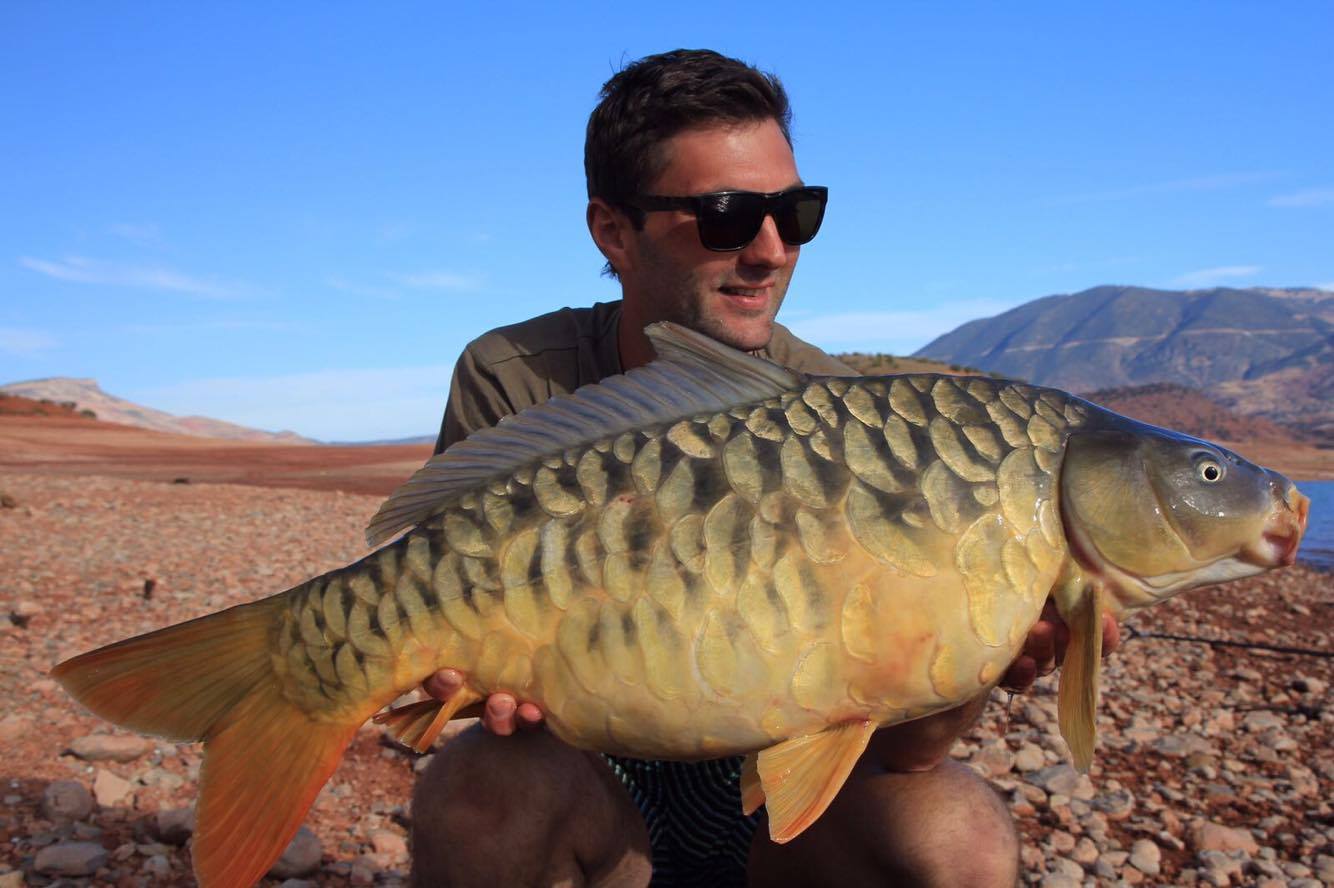 Armin Werth and his partner fished from Tanomy island, again the guys did very well with a massive number of fish, to 25k! Fishing shallow areas around the islands and regular baiting they had a great session. 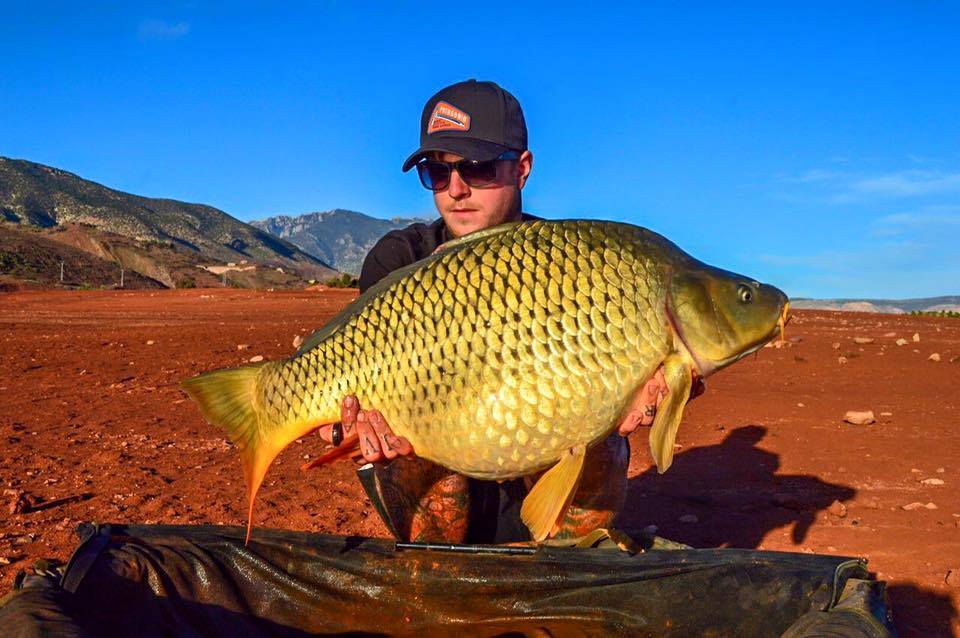 Jordan Murray from the uk fished the popular stefans point. He took 30 fish in his short stay, with some real stunners! fishing shallow areas around the point. This is an area that seems to reliably produce fish and a great spot that allows you to fish a number of depths from short to long distance, the fish seem to vary the depths they feed in here from week to week. 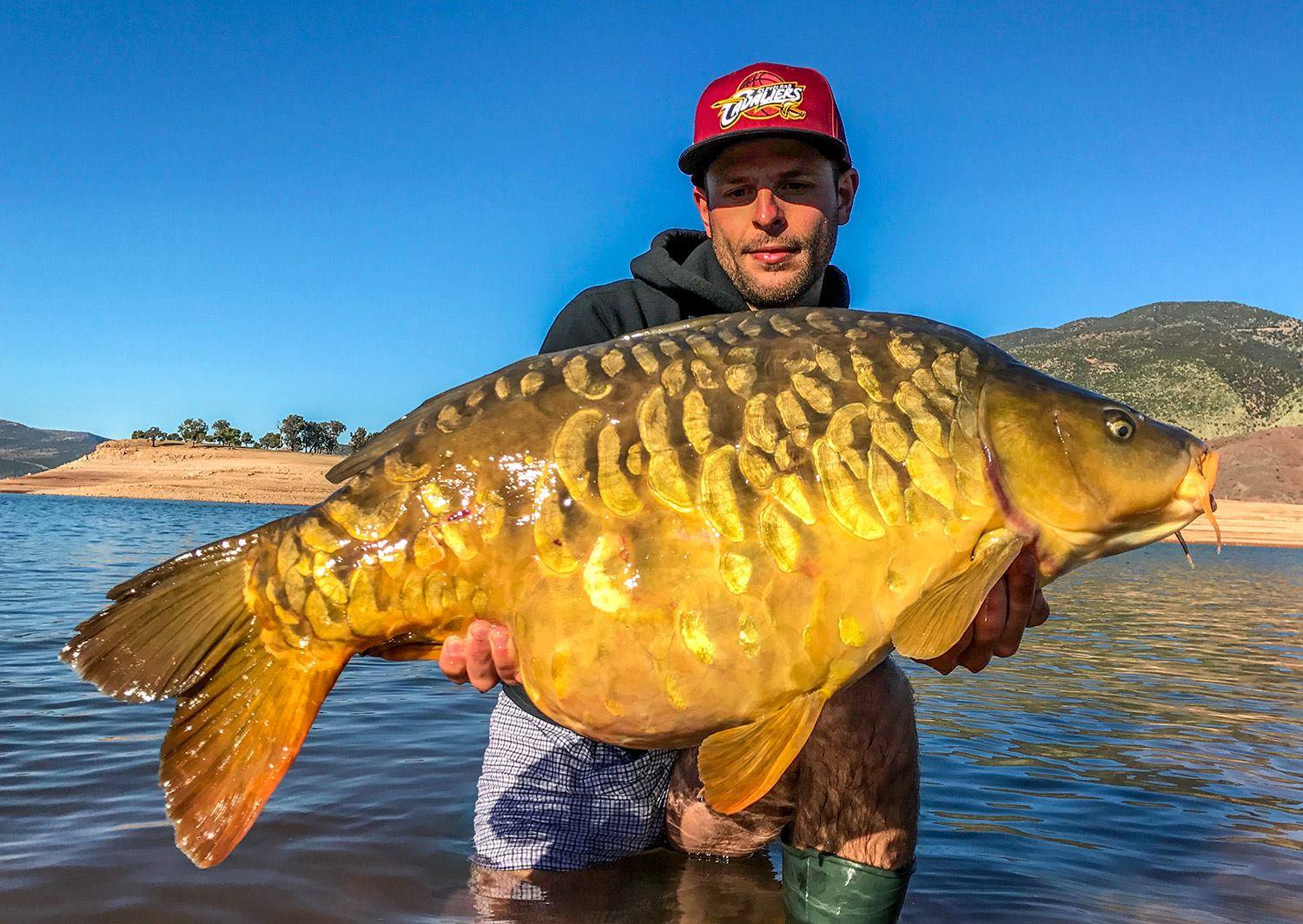 Filip Vds arrived on the lake to extreme weather conditions, for 24hours he experienced some torrential rain, but worked hard and fished through it. On his second day FIlip managed a number of fish with a stunning big 21k common.
Most of his fish came only at night and in depths of 5-8m!

With only 48hours left and water levels rising rapidly he made the decision to fish the last few days on paradise island. The island had nearly all become submerged underwater so he could only fit a bedchair on the rocks that were still above water level, no room for a tent!

On his last morning his efforts were rewarded with a magnificent 25k mirror, a very special fish and a great result, good angling. 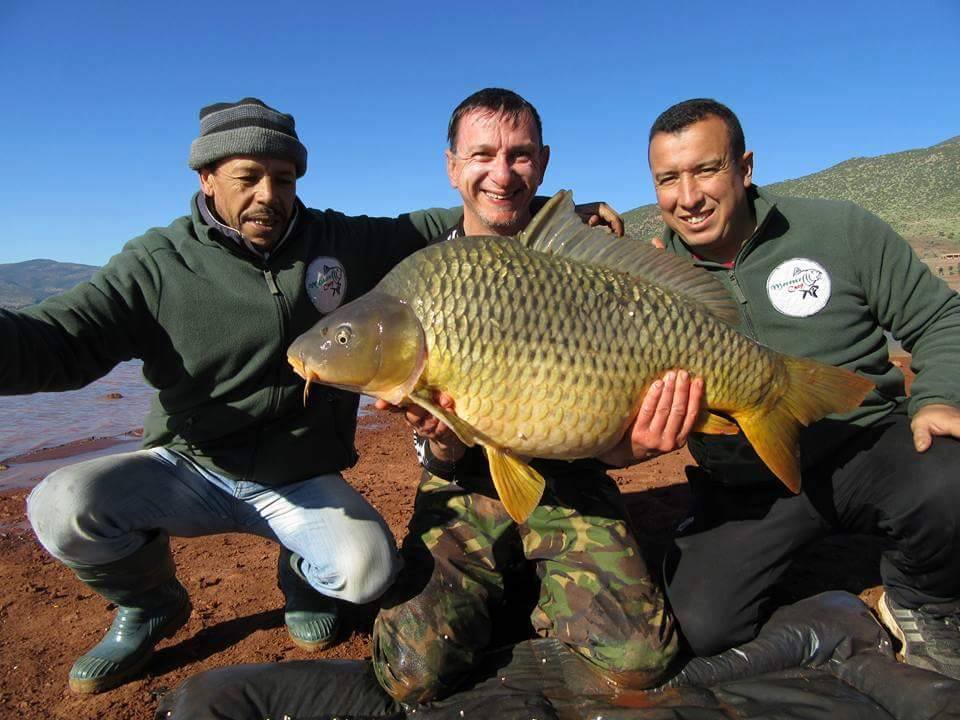 Martin Brown from the uk also fished from Stefans point. Fishing in depths of 5m he had a successful trip with a number of 15-18k fish. Baiting heavily each day, he noted that as the week went by, the average size was getting bigger by the day, sadly he had to leave but we feel some of the big big carp would have soon turned up as the fish were feeding heavily. Filip used Poacher Baits hookbaits. 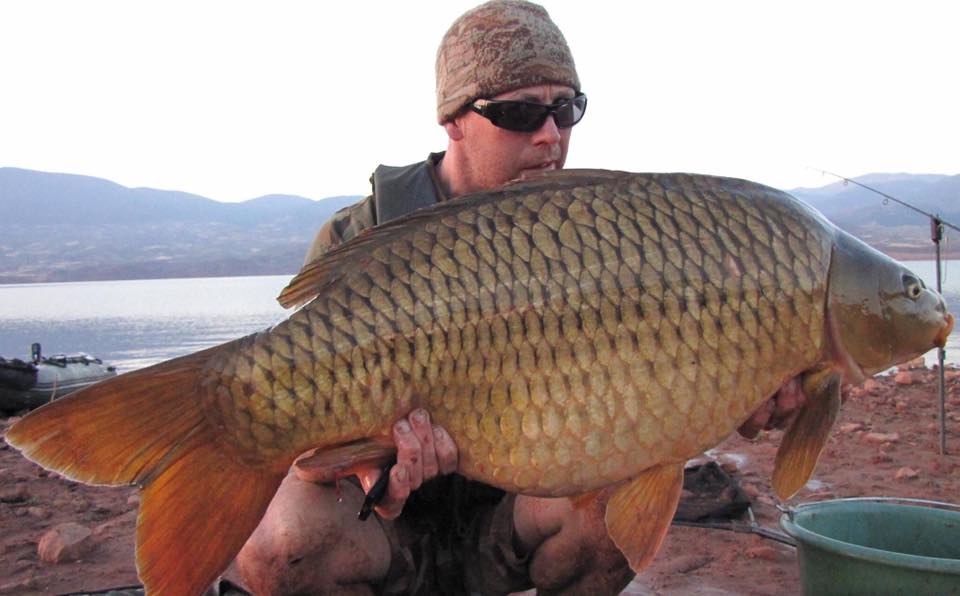 Jon-Paul Neafcyand his partner Michy Chellax Gomez who amazingly flew over from the Filipines fished Tanomy island, they both had only 4 days to get on fish, but in such a short time they fished hard and located fish. 12 in total. Well done to you both. 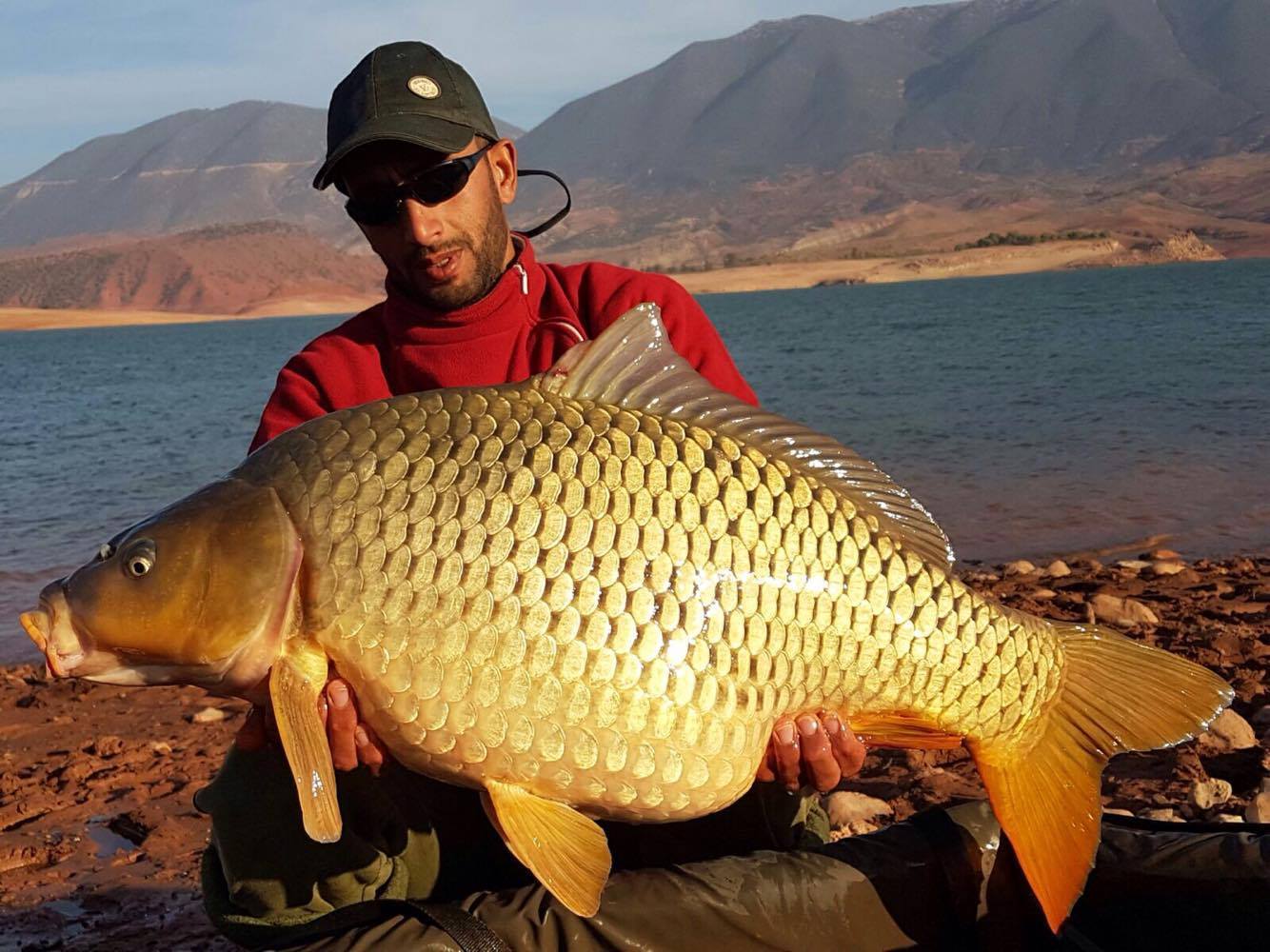 So another month has passed and with over 350 fish caught in December we now all wait to see what will happen in January. We have some good anglers coming out through January so I'm looking forward to the next catch report.

A big thank you again this month to the co-owner Hamid Ouallam II who made another epic road trip from the lake to Holland to meet Arjan Verkoelen Vortex Carp Boats Benelux to pick up our latest stock of new vortex boats and motors. We now have the amazing Vortex deluxe 3m boats in stock, a quality bit of kit! Cheers Hamid and Arjan.

Also big cheers to our wonderful guides Simo Oubehou, Salah Eddine Le Carpiste, Said and co-owner Michael Johansson who have all worked hard this month. This friendly positive team are all on the lake day and night and will look after any of you coming out to morocco 2017.

Lastly a big thank you to all you who visited the lake this month, the results from all your efforts have been amazing. With many booking return trips for 2017....

We wish you all a happy new year and look forward to sharing a cold beer with you guys later this year in the Moroccan Bin EL Ouidane sun!