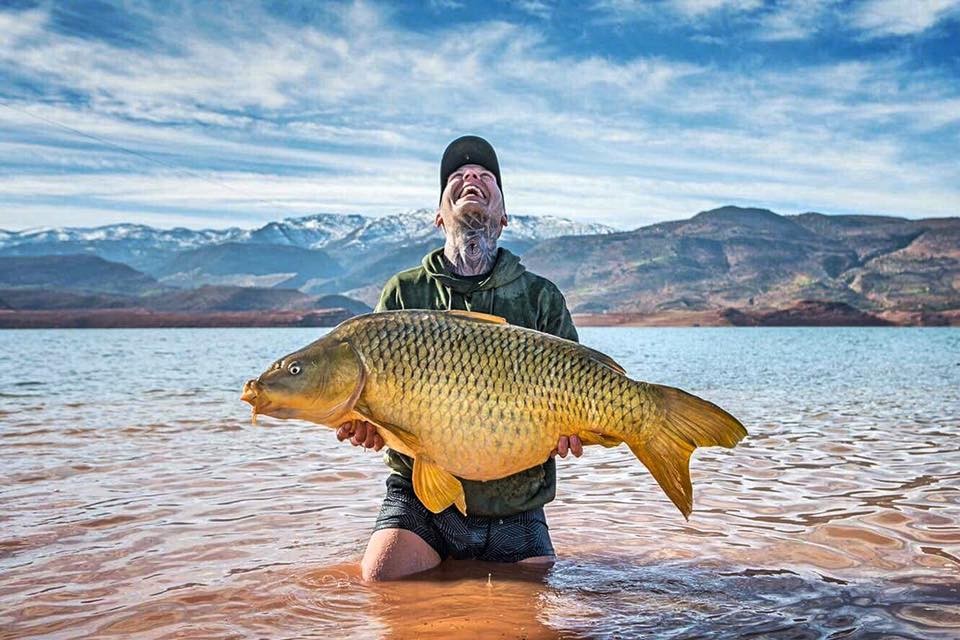 Following the rather unsettled weather of January, we went into February unsure whether the abnormally high snow fall and cold temps had finished for the winter or not!

As it turns out we experienced a greater snow fall in the higher Atlas Mountains in Feb and consequently this has had the obvious effects on the carp fishing that one would expect with wintery weather. 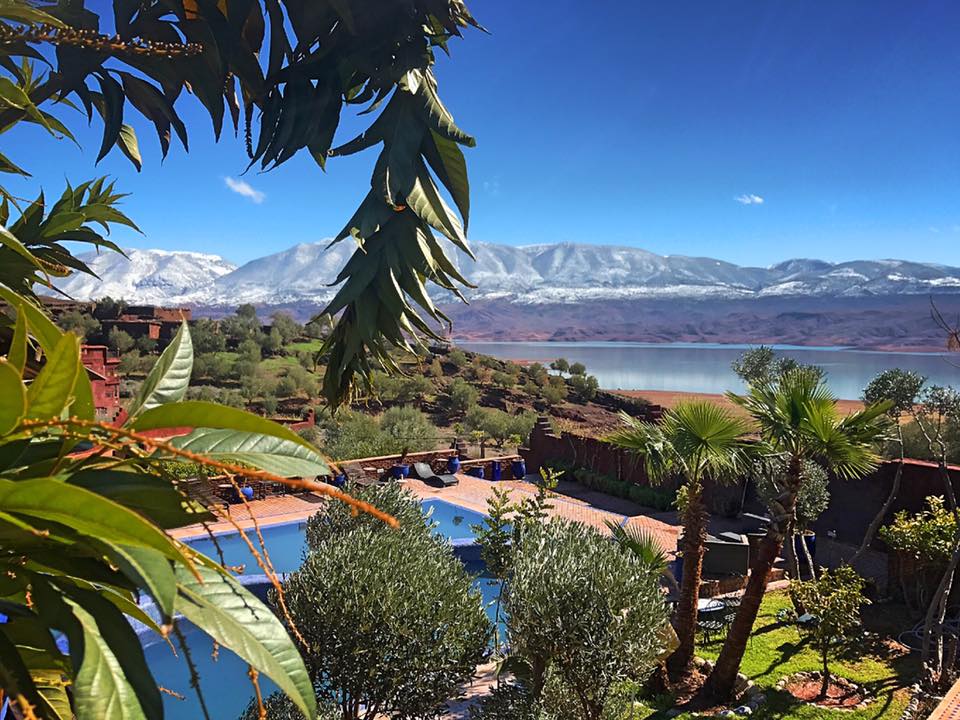 Much of the higher reaches of mountain around BEO were several feet under snow at stages in Feb, with some villages becoming inaccessible by road for a number of weeks.

As always from our perspective we welcome any snow or rain in Morocco following a few years of drought.
Snow essentially means water once melted and flowing through rivers, and this means rising water levels, which for BEO is a much welcome sight, as many of our followers will be aware of........ 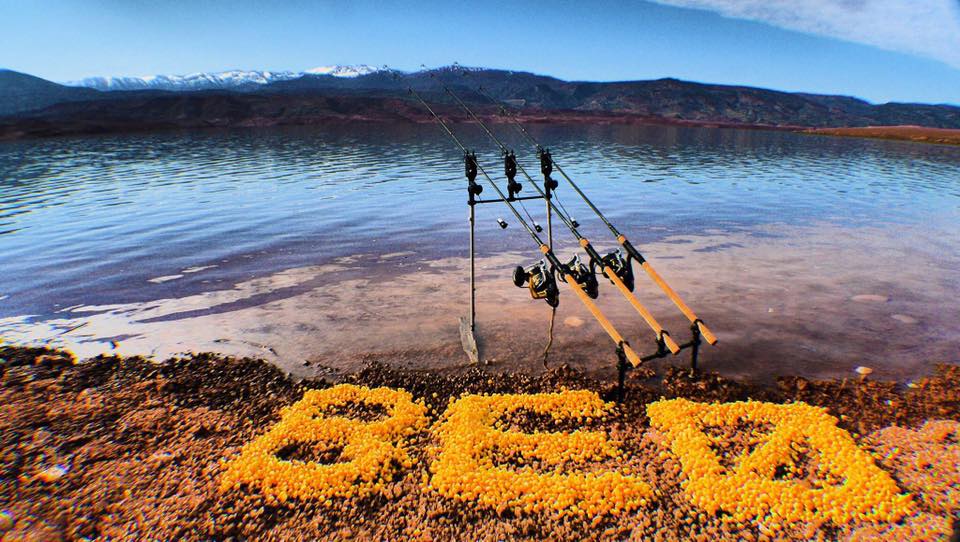 Despite the short periods of cold weather, life on BEO has generally been its usual sunny self. Day time temps have often been high and only by night have we really felt the cold.

What has undoubtedly played a huge factor on the Carps behaviour this month has been the cold water entering BEO from this melted snow! This is entering now from both ends of the lake, however the Ahansal river is providing the main source of inflow... 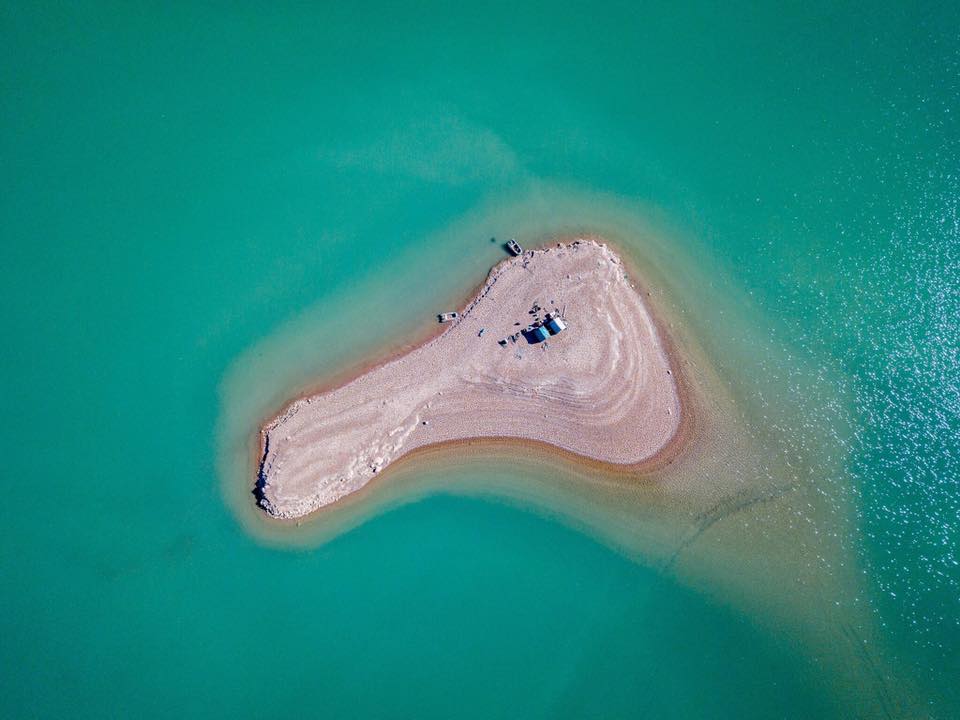 It can be deceiving sat on the lake enjoying blue sky's and sunny days, but only after monitoring the water temps do you realise that the water flowing through BEO at present is ice cold, and any carp angler will know the effects of cold water on feeding patterns.
It's generally slowed down the feeding, to short sporadic spells, resulting in rather inconsistent periods of action.​ 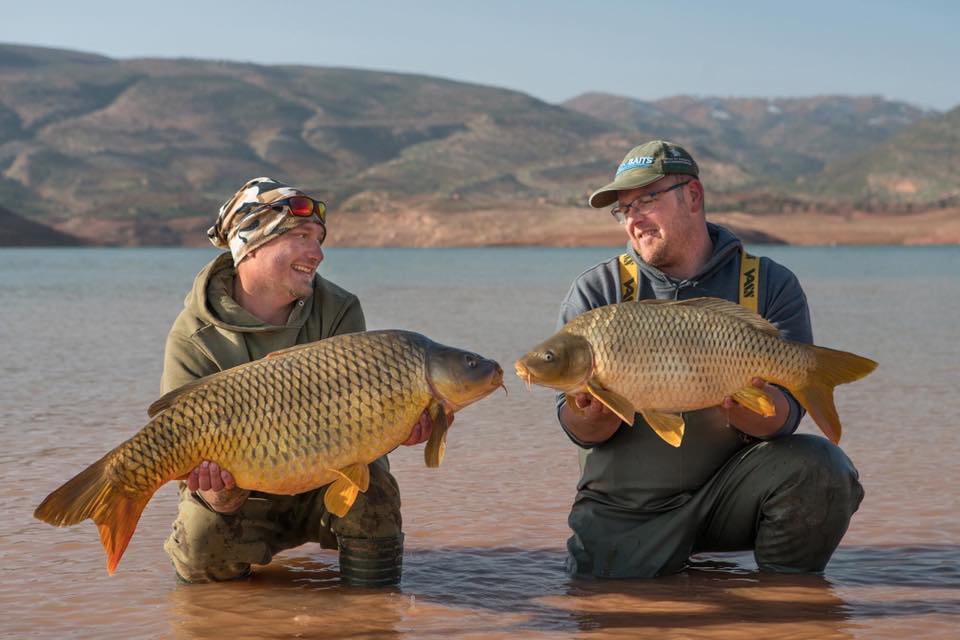 We've noticed the lake switching off for days on end and then suddenly coming alive for 3-5 days, and anglers all suddenly catching fish from a number of areas.

For those in the right place at the right time the action has been hectic, one angler taking roughly 18 fish in a 48h period! It's been incredibly unpredictable, occasionally frustrating but exciting once they start to feed intensively, as we are yet completely unaware of when or where, it might happen. 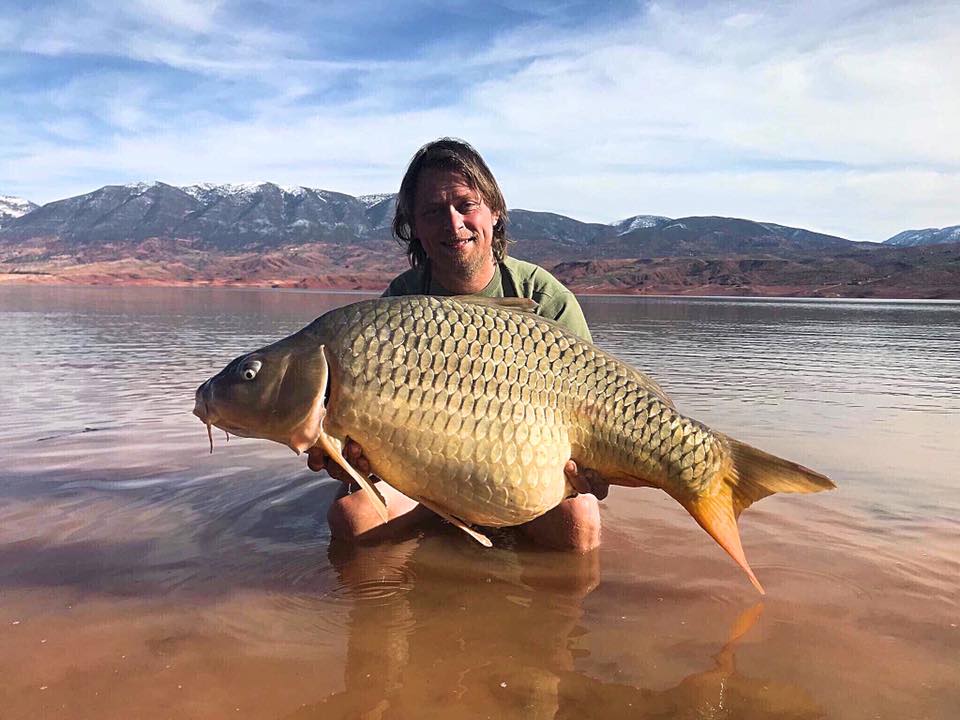 It's also been interesting this month to see some guys catching in very shallow water, from 2-3m.
This has generally been during the day as the carp we believe are moving into shallow areas to seek layers of water warmed by this daytime sun. 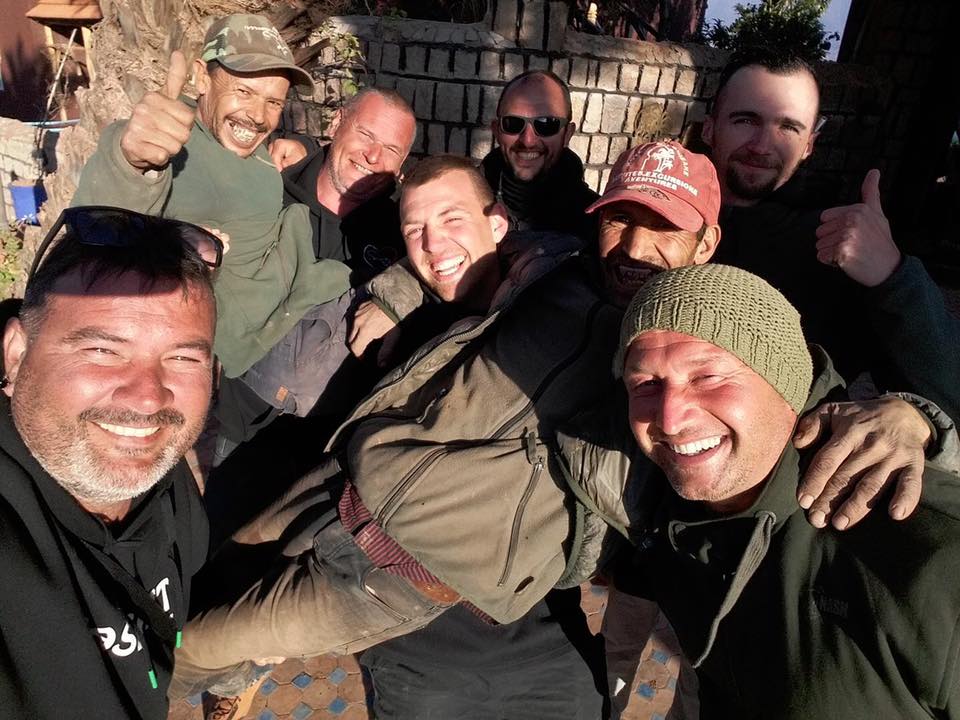 Areas and features of Shallow plateaus have continued to produce some good fish in Feb aswell as areas of slight gradual sloping depths, where the carp can either creep into shallows or hold back in deeper water. As always the key at present is to keep alternating depths until you can establish the depth they are feeding comfortably in, at that given time.
However depths of 3-10m this month have produced most fish.

Baiting wise, the carp haven't yet fully started the big spring BEO feed, so most anglers have kept baiting minimal. A few handfuls of well cooked maize and tigers have done well as have boilies when not overfed. Until the carp really switch on, the key right now is location, depths and just enough bait to get a bite or two when they do decide to drop down to feed. Over baiting at present would be the kiss of death. 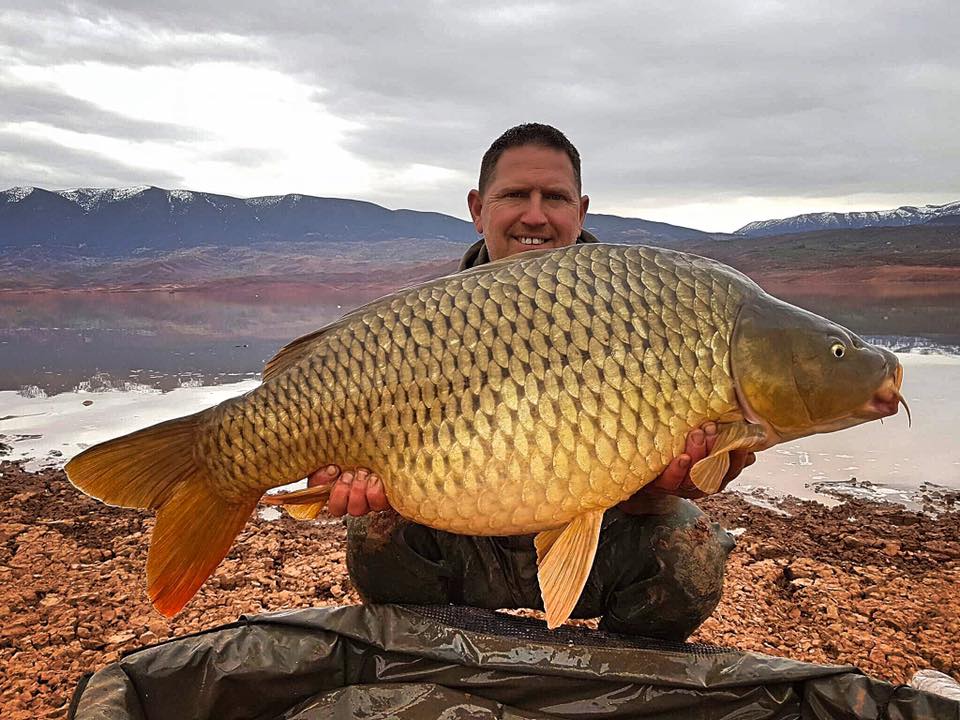 As ever on BEO, even when the lake is proving to be tuff going, we are still witnessing some immense fish being caught!
Over 115 carp in Feb, with a good number of fish over 40lb upto 52lb...

The stocks are so large on BEO that we have never had a week without some carp caught, and even during the heavy snow falls of jan and Feb 2018 we have still seen large numbers of fish caught throughout each month. There are always some carp somewhere to be caught on BEO....... 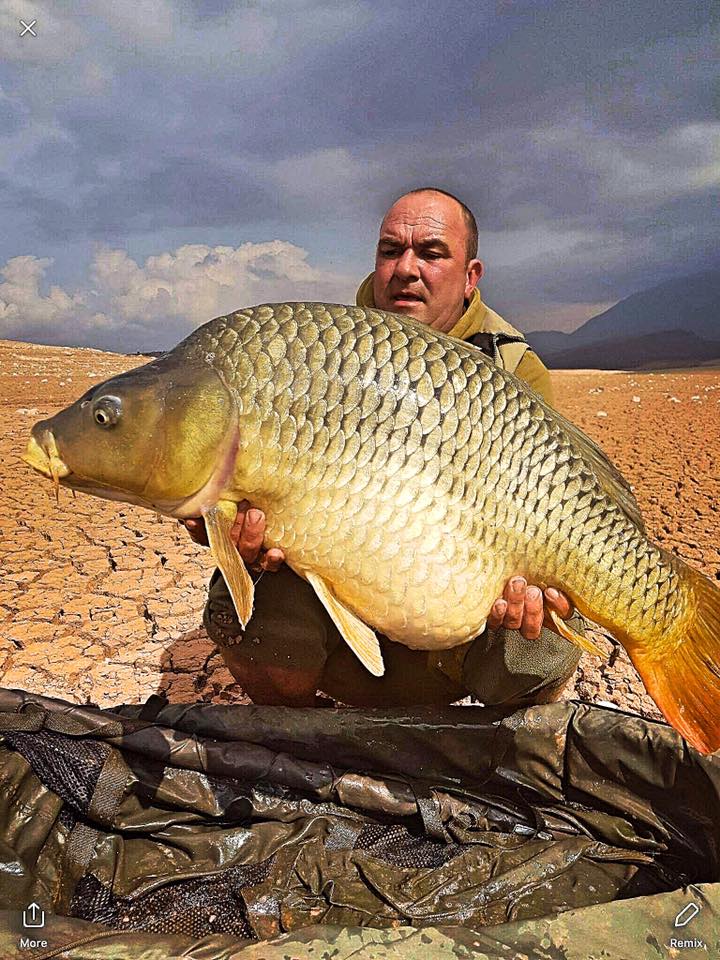 So we now enter into what is high season for morocco carp.....
The spring months of March - May have long been favoured by many who know BEO well, and we expect the carp will now start to become less shoaled up, and far more active as we move out of winter.

Action we hope will become more regular and evenly spread throughout the lake, as for the last two months it's been tricky at times to get the location right but as spring nears we hope to see it spread out once again. 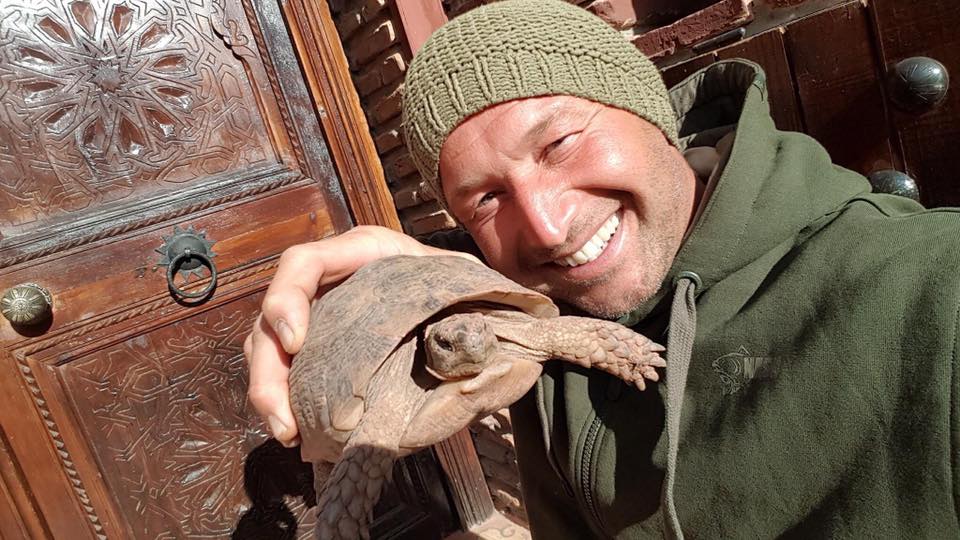 We also celebrate the annual start of our 3 months fishing the entire lake!
This is always an exciting time for Morocco Carp as we are able to allow anglers the chance to explore new, often yet unfished areas for the spring..
The true unknown of these unfished areas for those keen to explore and pioneer is a massive appeal to many who fish BEO at this time and it's amazing to see the new fish that tend to turn up from these areas.

March will throw up a few surprises as it does every year... 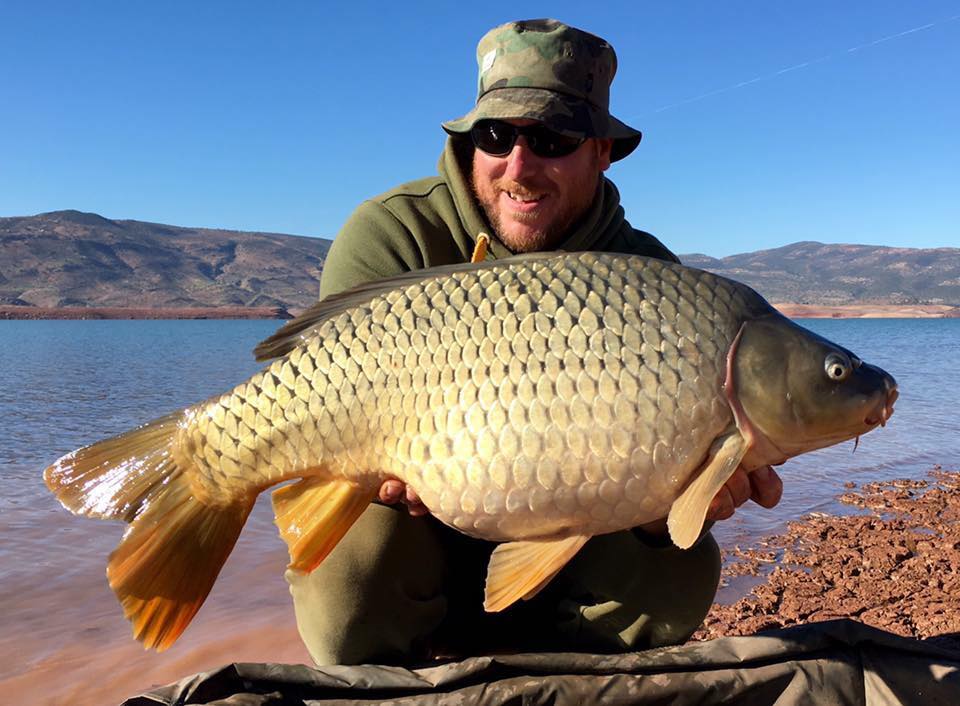 Big thanks this month to owners Hamid and Mike who set off on another epic road trip to pick up new gear for the 2018 spring season! This latest trip started in Sweden through Germany Holland Belgium France Spain Portugal and finally Morocco, collecting new equipment from each country from our many Suppliers and sponsors, so thanks to you all and well done Hamid and Mike...

And as ever thanks to the wonderful team of Morocco Carp Guides, keeping it all going and with a smile! Big up to you all, Grant, James, Dave, Said and Lassen!

For all those who fished BEO in Feb, well done and here are just a few pics you've kindly shared. 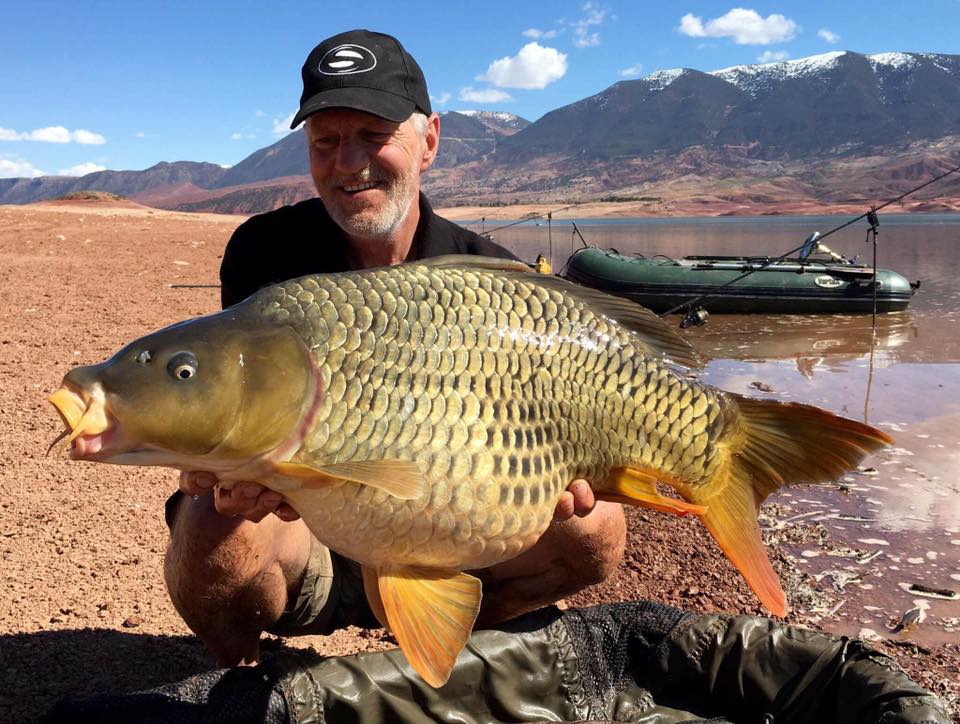 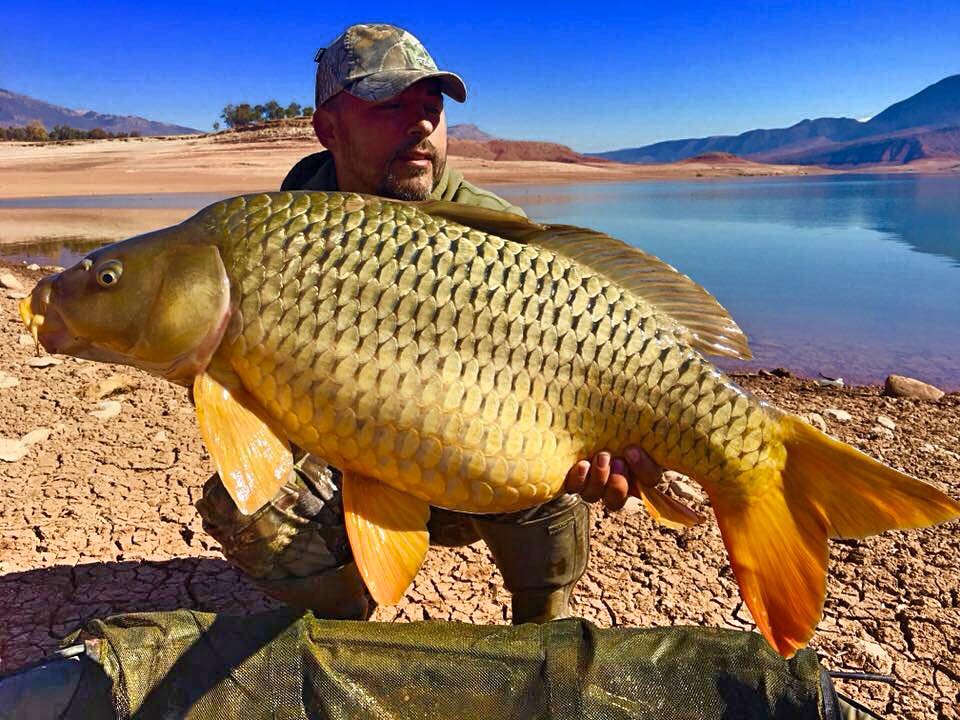 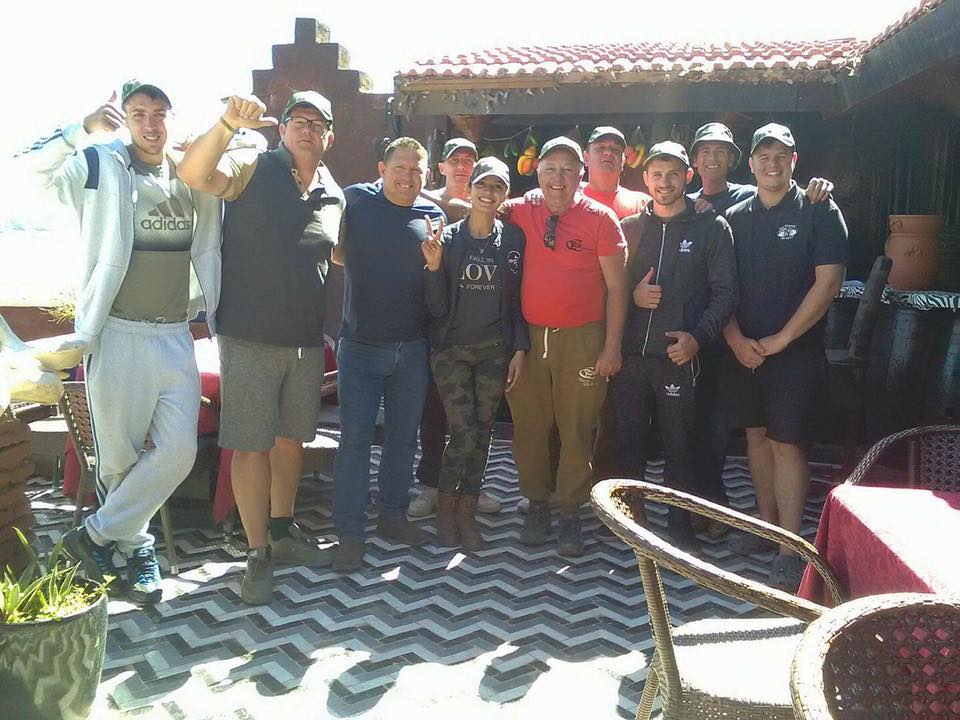 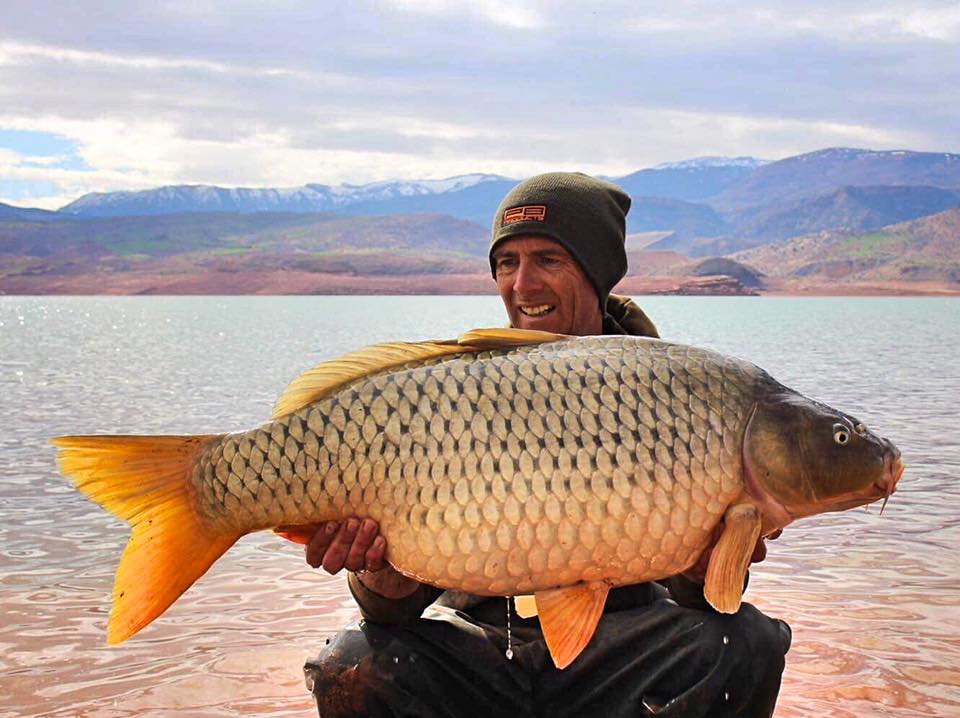 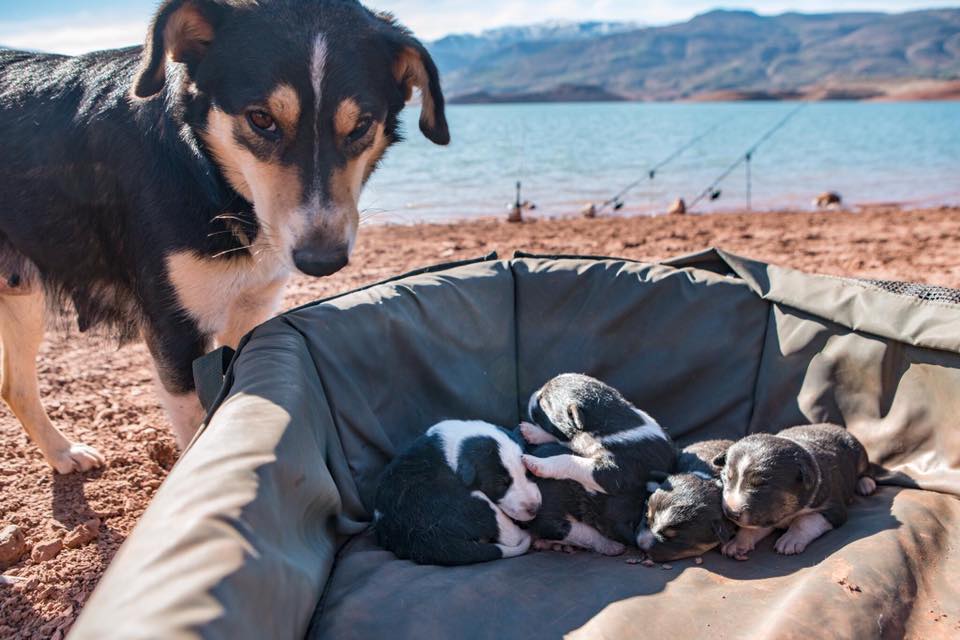 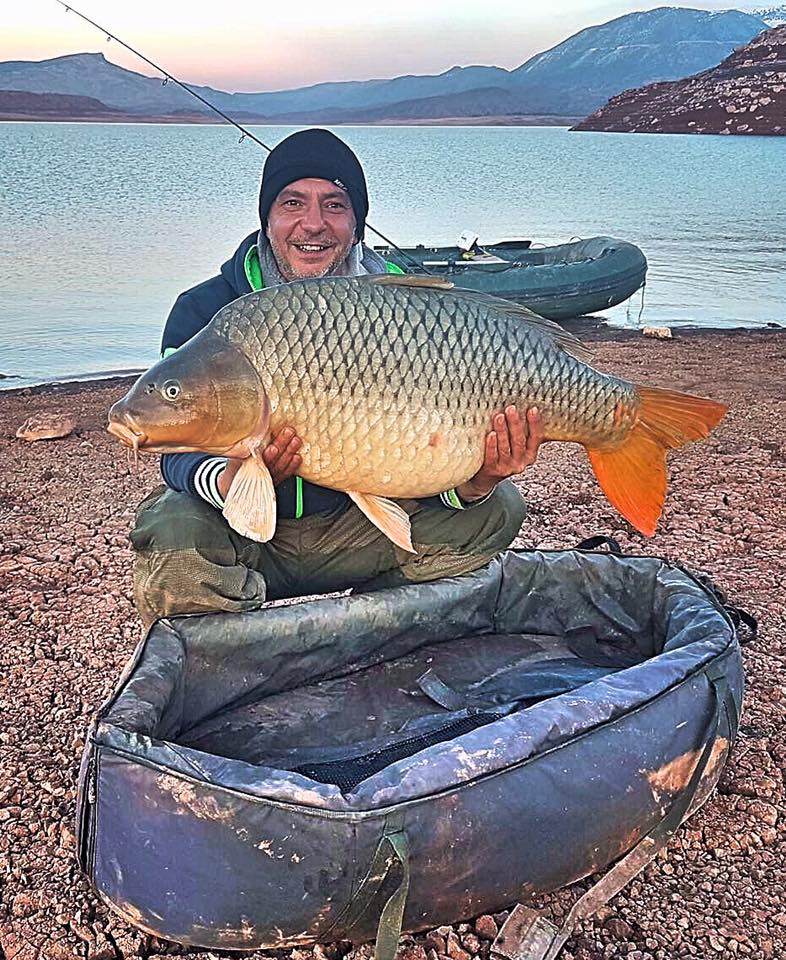 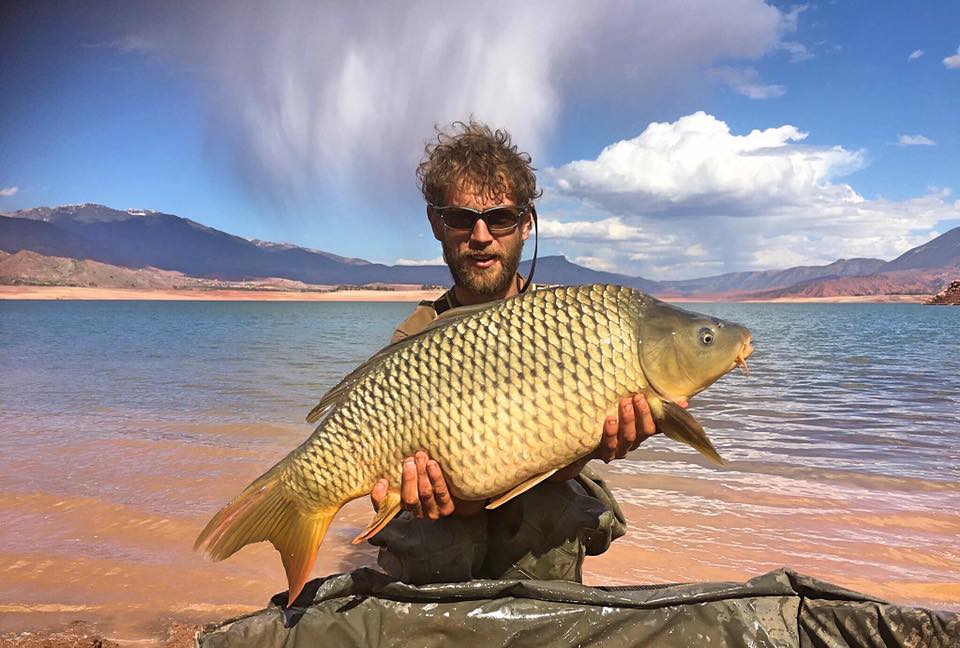 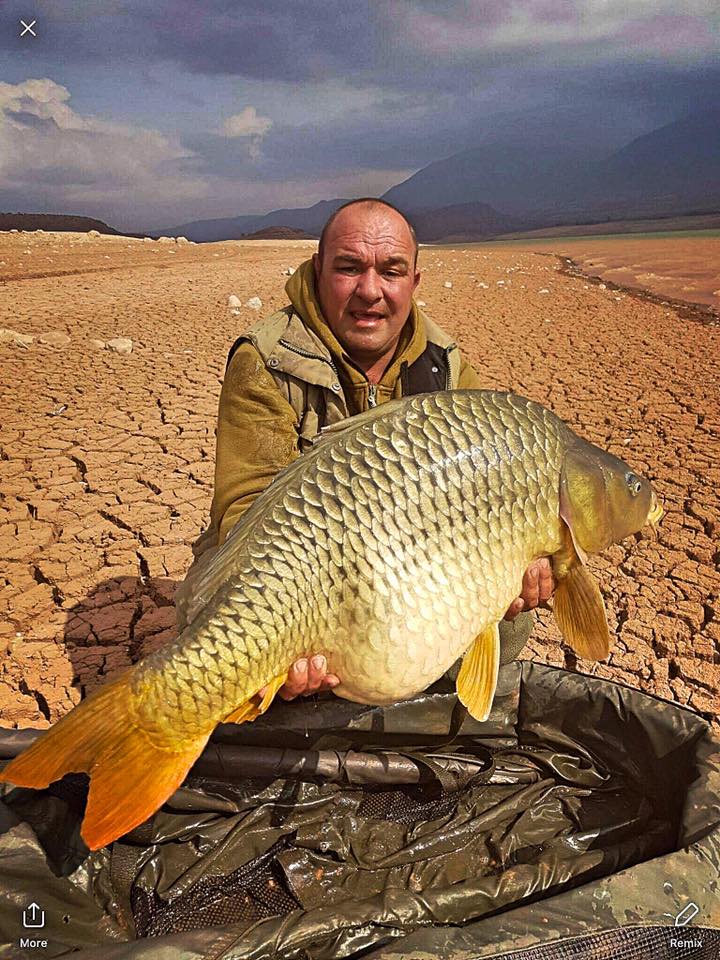